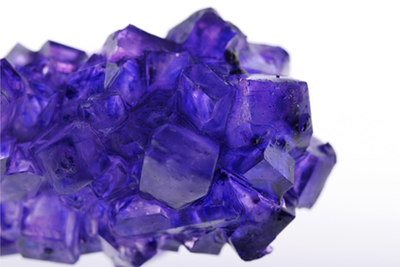 If you've ever seen a pretty crystal dangling from someone’s rearview mirror or hanging from a necklace, you may have thought it was pretty. But did you ever stop to think about the science behind crystals? Below is some scientific information about the composition of these mysterious solids and the science that seeks to understand them.

A crystal, also commonly known as a crystalline solid, is a solid in which all the smallest components (atoms, molecules, ions) are arranged in a pattern or form. The orderly repeating form of a crystal's atoms, molecules or ions extends in all three spatial dimensions. Because of the repetitive patterns found in all three spatial dimensions, these sparkly solids can take on strange and interesting looking forms. Growing them involves separating all the building block molecules of a solid into individual units (usually in water), then letting them fall naturally into their order in the repetitive structure. This happens as the water evaporates.

Crystallography refers to the scientific study of atomic, molecular or ionic structure as it relates to the formation of crystals. Crystallographers seek to understand how the smallest components of a material are arranged in order to comprehend the relationship between atomic structure and properties of these materials. This branch of science started with the study of crystals, but expanded to the study of atomic architecture of any material that can form an orderly solid.