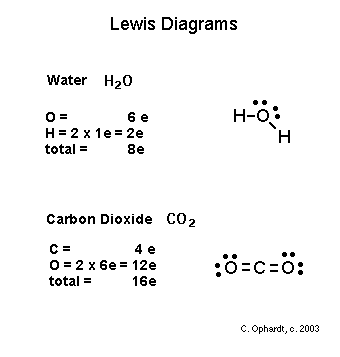 In a covalent bond, electrons are shared between the elements. This is shown on a Lewis Diagram by pairing the two elements and circling the shared pairs of electrons.

For example, when hydrogen bonds with any other atom, its valence electron is shared with the recipient atom. The two atom's symbols are drawn next to each other, and the shared pare of electrons is circled. Covalent bonds drawn with Lewis Diagrams can become quite large and complex. The system gives scientists a visualization of how the compound comes together.

Ionic bonds can also be drawn with Lewis structures. Instead of placing the two elements close to each other and circling the shared bond, as is done when drawing covalent bonds, ionic bonds are indicated by the charge each atom has after gaining or losing an electron.