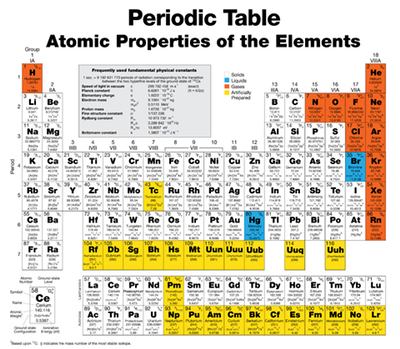 The periodic table of the elements is one of the most commonly used tools in the chemistry lab or classroom. This chart arranges all known elements based on specific characteristics. Understanding the periodic table makes working with elements and compounds much simpler, because it can be used to predict how a particular element will respond in a reaction.

Each row of the periodic table is called a period. The period number of a particular element indicates the highest energy level the electrons in that element can occupy, provided they are not in an excited state.

The columns on the periodic table of the elements are called groups. Each group indicates the valance electron configuration of that particular element. Elements in the same group will have same chemical structures and behavior. For example, the noble gases all fall into group 18 of the periodic table.

Each group has a specific name. These are as follows:

The periodic table is organized by increasing atomic number. Inside each square, the element is represented by its symbol, atomic number and atomic weight. When arranged this way, the various types of elements (gases, metals, nonmetals) end up being near one another, creating an organized, understandable chart that chemistry students can use to find out information about elements they are working with.