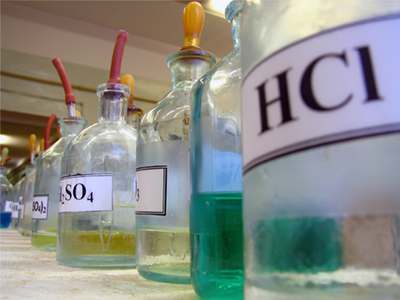 Most of us are familiar with the pH scale, but do you know what it really means? Basically, the scale calculates the concentration of hydrogen ions, (H+). The higher the concentration, the more acidic the solution will be, and the lower, the more basic or alkaline it is.

The scale runs from 0-14, with 7 being completely neutral and 0 being acidic. Since the scale runs on a logarithmic scale and is based on powers of 10, 6 on the scale means it is ten times more acidic than simply 7. That's why you will find that many things are gauged in increments. For example, the human body tends to be a 7.4 pH level, not neutral, but not extremely acid, either.

Acids are substances that can give protons (hydrogen ions) and bases can receive them. While they might seem like complete opposites, both can cause severe damage to human skin at far ends of the scale, though for different reasons.

Alkaline compounds cause saponification of fat cells in the skin, causing alkaline burns. This is the same process used to make soap with a base like lye and fat, such as lard. Unfortunately, it has painful and possibly long term effects when it occurs in your body.

Acids work differently, by breaking up when they come into contact with water. This dissociation creates volatile molecules that actually produce heat and cause chemical burns.

Both acids and bases have important roles to play in the world, but they can be dangerous, and it's a good idea to understand them.