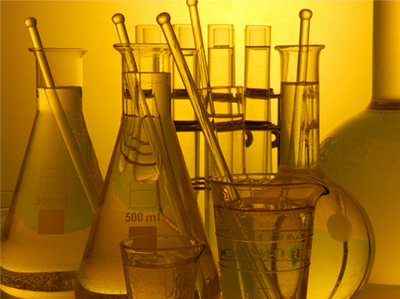 My decision to major in chemistry in college was in part inspired by my infatuation with the Gilbert chemistry set my parents gave me when I was 12. I spent countless hours in my basement chemistry lab having fun doing a large variety of experiments.

To me, a movie that portrayed a “mad scientist” working in a well-equipped lab, surrounding by flasks containing colored liquid and emitting mist because of dry ice placed in the containers, was fascinating and made me want to emulate them. These fictional scientists included Dr. Frankenstein and Grandpa Muenster.

I had the ideal home lab set-up. Our basement was divided into a large finished and smaller unfinished sections with a door between them. The unfinished section had a huge table in it when we moved in, and this was my lab table. I placed a small bookcase on top of the table to hold my glassware and chemicals. On the wall, I thumb-tacked a periodic table. The basement lab had a large cast-iron sink with good drainage for disposing of my experiments when finished.

At first, most of the experiments were in the manual that came with the chemistry set. By mixing small amounts of two chemicals in a beaker of water, the liquid would instantly turn bright red; the manual dramatically called this simple experiment “turning water into wine.”

My chemistry set came with a plastic model volcano. You put in a drop or two of red food dye, a tablespoon of baking soda, added vinegar, and quickly pushed a plastic cap in place. The pressure of the reaction of the baking soda with the vinegar popped the top off, causing an “eruption” with red vinegar “lava” pouring down the sides.

As most kids do, I began conducting other experiments not included in the manual. These included distilling wood, making gun powder, and building both a voltaic cell and an electrolyte tester.

To make the electrolyte tester, I had to open two C-cell batteries with a hack saw and extract the carbon rods. The rods were then mounted a short distance apart in a wooden holder and were connected to the household current and also to a light bulb. To measure the strength of an electrolyte, you dipped the rods in a solution by holding a beaker under them. The stronger the electrolyte, the brighter the bulb would shine.

Looking for a more realistic volcano, I poured a pile of potassium permanganate onto a surface and pressed my thumb into the center of the pile to make a cone similar in shape to a volcano.

With an eye dropper, I put a few drops of glycerin into the cone. It was a delayed exothermic reaction. At first, nothing happened. Then in about a minute, the volcano began to smoke, orange sparks shot out, and ash poured down the sides.

To distill wood, you simply pack a test tube with wood slivers and hold it over a hot flame with tongs. The wood gives off a sulfurous stink and a black tar forms in the test tube.

Sometimes the chemical fun was simple indeed. I bought a strip of magnesium and lit one end with a blow torch. The magnesium ignited and burned with an intense white flame.

Another interesting and easy experiment was, while wearing a heavy glove, to take a penny and press it against a piece of dry ice. The intense cold contracted the metal so rapidly, the penny emitted a screeching sound.

I bought sulfuric acid, a chemical no parent should allow their child to have, and poured it into a bowl of white sugar. The sugar began to form a black solid similar in appearance to a rock; it rose above the surface of the bowl and continued to expand for quite some time.

I liked fireworks because they were chemical-based. One day I affixed a small bottle rocket to one of my Hot Wheels cars, placed the car on the orange Hot Wheels track, and lit the bottle rocket. My miniature rocket car took off, well, like a rocket and impressed the heck out of my friends.

My experiments were not always limited to chemistry. Based on instructions I found in a science magazine (remember, there was no Internet or Google to find this stuff), I build a home make incubator, bought fertilized chicken eggs, and hatched live chicks.

Another biological “experiment” was the purchase of the infamous Sea Monkeys. These were actually dried brine shrimp eggs that in essence were in suspended animation until placed in a bowl of warm water. In a day or two the eggs would hatch into a bowlful of small live brine shrimp, which made great food for my tropical fish.

A large number of scientists say it was their childhood chemistry set that first sparked their interest in becoming a scientist. These include Nobel laureates George Porter, Paul Boyer, Robert Curl, and Richard Schrock. Best-selling author Oliver Sacks wrote, “I do not thing there can be any adequate substitute for having a chemistry set or a little chemistry lab and doing experiments oneself.”

The difference between kids playing with chemistry sets and professional chemists is that the professionals measure everything precisely on sensitive scaled to see how much of a given chemical is required for or consumed by a reaction. Kids just like the effects and as a result do not weigh chemicals before and after they combine, although some chemistry sets come with scales that are not terribly accurate.

Many of the chemistry sets sold then and today are relatively harmless, although I recommend experimenters wear safety goggles to protect their eyes from accidental splashing. But not all chemicals used in home labs are safe. Sodium cyanide can dissolve gold in water, but it is also a deadly poison.

Sulfuric acid, which I once used to make a miniature lead storage battery in a beaker, caused a nasty burn when I spilled a single drop on my arm. “Atomic” chemistry sets of the 1950s included radioactive uranium ore. Chemicals in test tubes were heated with small alcohol lamps which could start a fire if the alcohol spilled while the wick was burning.

What was interesting about the lead storage batter was that each time it was used and ran down, a layer of lead sulfate was deposited on the lead electrodes. When I recharged the battery, the lead sulfate-covered electrodes could store electricity longer than the uncoated electrodes. Using a voltage meter borrowed from my high school, I graphed the increased storage time and got an A on the chemistry project.

I started with the basic Gilbert set, then went to chemical and laboratory equipment supply houses, gradually expanding my starter set into a decent home lab, at least for a 12-year-old. I did not have a Bunsen burner or a gas connection in my basement work table, so I bought a blow torch which I mounted in a makeshift stand made by twisting a metal clothes hanger.

You do not need a chemistry set to do many experiments at home. One of my favorites was putting a clean bone from a chicken drumstick into a water glass filled with vinegar. The vinegar caused the calcium to leach out of the bone, making it so flexible and rubbery you could just about tie a knot in it.

My interests extended to botany, especially hydroponics, and to biology, with exotic pets including a blue lobster (actually a crayfish) and a freshwater stingray. I changed the tank over to saltwater and had at one time a sea anemone, a small snowflake eel, and a lionfish.

I attached four wooden rods to a wooden base; cut square of zinc, copper, and blotting paper; soaked the bloating paper in vinegar; and piled them between the rods: zinc, paper, copper and then repeated the sequence many times. I attached copper wires to the bottom zinc plate and the top copper plate, then touched the wires to a small bulb with lit up. This arrangement is called a voltaic pile.

Chemistry sets, once a popular hobby, are now increasingly difficult to come by. Most hobby and toy stores today don’t stock many chemistry sets, and many of the ones they do have are pretty lame compared to the great Gilbert chemistry sets we had as kids. Here, however, are some places you can get good chemistry sets online: